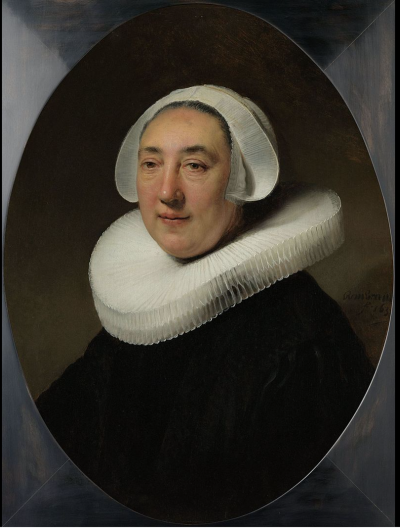 Aristotle with a Bust of Homer

Collectors of Rembrandt come from all walks of life. His etchings are found all over Europe. His paintings are diverse in themes. Being a collector himself, Rembrandt worked with Adriaen Jansz, a Dutch art dealer and painter, for many years buying and selling artworks. The piece portraying “Aristotle meditating before a bust of Homer” was a custom-order by a nobleman from Sicily, Italy; records show that the buyer had let Rembrandt decide on the theme. But we don’t know why he chose this topic. Historians who studied Rembrandt said his artistic career had been going downhill since 1641, and he had serious financial problems. This painting, created in 1653, was close to the point of his bankruptcy. The painting is unusual and has a theme different from his other works. Rembrandt’s life was full of ups and downs, from glory to poverty; he went through bereavement for his wife and children, and was troubled with lawsuits. This work is perhaps a contemplation and introspection for Rembrandt himself.

“In the painting, Aristotle is wearing a gold chain, he holds a gold chain in one hand and strokes a bust of Homer with the other, while deep in thoughts. The gold chain is engraved with the name of his student Alexander the Great. Is this the highest glory for him? Or he thinking about Homer’s glory for having completed the two great epics—the Iliad and the Odyssey? Homer, blinded yet had completed such immortal masterpiece, and Alexander, who’s prowess was incomparable, have both became a mere page of history. Are these Rembrandt’s contemplation when reflecting on his own problems?”—Adam Eaker (Words from the curator)

Today, “Rembrandt” has become a symbol in the Netherlands: products such as toothpaste and baby gears are named after him, and not to say hotels, restaurants, and art-related products. But in fact, in the century following his death in 1669, he was forgotten. His paintings are complex and prolific; it is estimated that he completed 600 oil paintings, 400 etchings, 2,000 sketches, and 90 self-portraits (including copies made by his students) in his lifetime. Thirty years ago, etches that seem to be his work could still be found in second-hand bookstores in Germany. For one-third of his life, he enjoyed the fame and wealth that his art brought him; but his squandering and extravagant lifestyle led him to end in poverty and desolation. Later generations could not even find his burial place. The “Rembrandt” we see today was only rediscovered in the mid-18th century, and through efforts of specialized organizations, his paintings reemerged before the public.

For hundreds of years, western scholars and painters have debated on Rembrandt’s paintings. His status was finally secured when he became highly praised by Romanticists and Modernists in the second half of the 19th century. But with praise, came criticism. The most astounding comments, in my opinion, came from John Ruskin (1819-1900), a British art critic, painter, writer, and the father of the American Pre-Raphaelites in the 19th century. He said: “The best painters aim to paint the most beautiful and precious things that they see under the sun, while Rembrandt paints the dirtiest things that he can sees under strong naked light.”  When I read this sharp comment from Ruskin, I felt relieved, for Ruskin had pronounced what I had in mind. I later discovered that others made similar comments in the 18th and 19th centuries.

Rembrandt was well-educated and trained in painting. His early paintings are meticulous and peaceful, especially his portraits; and perhaps they had met the market and customers’ demands, they became his source of wealth. Rembrandt’s skills are beyond doubt. But reaching middle age, his paintings changed. The paintings were filled with a rough sense of the world. The lights were no longer natural or holy; it was like a declaration that: “This is the world I see,” murky and crude.”

Several large-scale works, which he was hired to create, such as The Anatomy Lesson (1632), inherited the calmness and rationality of the northern art. Ten years later, in Night Watch (1642), under his rough brushwork, figures were portrayed with a dynamic and uneasy progressiveness, which resembled scenes in modern day movies. In fact, his painting style has greatly influenced future generations. Night Watch is also the name given to it by later generations. Experts who studied Rembrandt found that he was not painting a scene at night, but the exact moment when soldiers walked out of the shadow and into bright sunlight. This misunderstanding was due to his choice of paint, the tone of which has faded with time. It is no wonder Ruskin would said that Rembrandt painted the worst with naked light; it was a harsh comment, but a critical one. Ruskin, who loved classical art and advocated learning from nature, would, of course, dislike “Rembrandt’s lighting.”

But Rembrandt’s lighting of a subjective worldview has drawn the attention of many modern artists. Including, in earlier times, the German romanticist writer Johann Wolfgang Goethe, France’s Eugène Delacroix (1798-1863), Spain’s Francisco Goya (1746-1828), the modernist sculptor Auguste Rodin, (1840-1917), and even Van Gough (1853-1890) and the contemporary British Damien Hirst (1965-present). Interestingly, Rodin found himself unworthy to be compared with him. Looking at Rodin’s sculptures, then at Rembrandt’s self-portraits in the later period, there are clearly many things in common.

Rembrandt had many students, many of whom may have left copies of his portraits. Those who studied him concluded that there were at least forty such portraits and 13 etchings with his signature. Recently, people have discovered more of his self-portraits. One of his major contributions is to make etchings a kind of artistic creation, rather than just a medium for missionary work, making etchings much more accepted. Many of these etchings were directly engraved on dry point. Rembrandt painted a lot of scenes from biblical stories. But if one doesn’t read the title, one may miss out the association with the biblical stories and mistaken them for paintings of every day concerns. He liked to use his neighboring Jews as models. His biblical stories seem to have a strong sense of “reality,” that of the secular world, and far from the biblical characters of the Renaissance. Art critics say that he had seamlessly blended the secular and the spiritual. Another interpretation is that he had secularize the gods.

Over the years I have seen many of Rembrandt’s paintings in major art galleries. The New York Metropolitan Museum of Art and the Frick Collection, several blocks down the street, both hold many of his paintings. People talk most of his works in later years, his self-portraits, The Polish Rider, and the St. Matthew and the Angel in the Louvre. When seeing St. Matthew and the Angel for the first time, it was hard to connect with the apostles and angels in the Bible. These portraits were as if covered with thick dust, conveying the sadness, emptiness, and bitterness in Rembrandt’s life, and perhaps, a remnant of pity for the world. This is probably the reason why modern artists admire him.

The painters at this time have abandoned the gods, classicism, ideals and the legends; instead, they  focus on the stories of men driven from the Eden. “Modernism” can be said to have begun with Rembrandt. The Netherlands had acquired rapid social and economic developments through maritime trade, which gave rise to the widespread demand for “art.” The combination of painting with realism, is closely linked to the social structure of the time; with the booming businesses and material abundance, more people are able to engaged in painting, and most of which are topics related to daily life. Within the twenty years of the Dutch Golden Age, several millions of paintings, large and small, were created.  Under this commercial trend, Dutch painters in the 17th century are no longer concerned with the classical and philosophical connotation in art, which artists of the Renaissance period would regard as the basics. Most of them drifted along with the current of the society and the chaos of life.(To be continued)◇