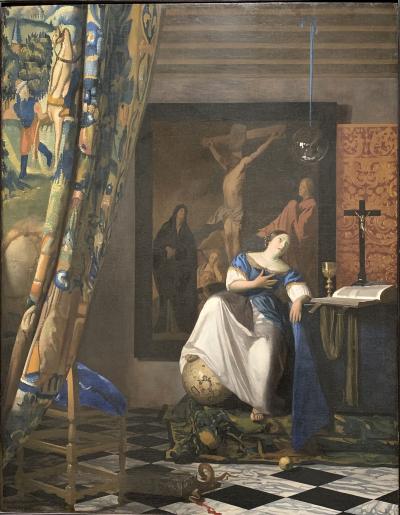 The Dutch in the Seventeenth Century—A Commercial Republic

Lairesse’s idealism and Rembrandt’s realism are two ends of the spectrum in art. They existed and were evenly matched at the same time, and had left different influences on later generations. While European countries were engaged in endless religious wars in the 17th century, the Netherlands had gained independent from Spain, established a republic, and actively engaged in maritime trade and slowly accumulated wealth. In 1602, the Dutch East India Company was established. It was the first multinational company ever to be financed by stocks, and later help to establish the first modern stock exchange. The company led the Netherlands to gain monopoly in trade with Asia for two centuries, making it the largest trading country in world in the 17th century. In 1609, the Bank of Amsterdam was established as the first central bank.

The social status of the Dutch at that time was largely depended on personal income. The importance of the nobility was gradually diminishing, and urban merchants were becoming the dominant Dutch social class. Large-scale paintings and sculptures funded by the Holy See and the lords were seen no more; the nobles even became attached to successful businessmen. The painters have lost their major clients, and historical paintings were less in demand. All this gave rise to the many realist painters such as Frans Hals, Jan Steen, Pieter de Hooch, and Rembrandt.

The Dutch practiced Calvinist Protestantism and had prohibited religious paintings in churches. This was one of the important reasons that Dutch paintings become secularized. Although biblical-themed  paintings were still in demand in private homes, the production volume and layout were relatively small. Only artists like Lairesse and Johanna Vermeer (1632-1675), who lived in Delft, held on to the sublime traditional of classical painting. Vermeer had created few works in his life due to his rigorous attitude towards painting. In the Dutch golden age, when most focused on the themes of everyday life, he was a unique and inscrutable painter. His Girl with a Pearl Earring, in particular, was regarded as the Netherlands’ national treasure; people would even compare it with the Mona Lisa. The lives of the women portrayed in the two paintings were both mysteries to later generations: one seems to be a mysterious upper-class lady, and the other is like a pearl among the folks. (To be continued)

The social trends of the commercial powers have allowed businessmen to gradually establish  the middle class in the Netherlands. Women’s lives and liberty have also changed. Young women were allowed to learn, to be entertained, to socialize, and to read. Under in this environment, the people’s moral consciousness have also begun to change. Paintings of “women’s daily life” and of secular world appeared in large quantity. Buyers can be lawyers, physicians, businessmen, industrialists, and officials of major national institutions. Portrait paintings were no longer the privileges of nobles, and paintings of women’s daily activities are also created one by one.

The most representative and independent artists should be Johannes Vermeer (1632-1675). His works cover all aspects of the Dutch society in the 17th century, from milkmaids to the affluent celebrities and wealthy businessmen in their spacious homes.

Unlike Rembrandt, who has self-portraits from youth to old age, Vermeer was a man of mystery, and little is known about him. Vermeer’s paintings reflect the world he lived in. The paintings he left behind include themes of religious allegories, poems, women, music, and scientific criticism. But there are no portrait or log about himself. He lived a short forty-three years, fathered ten children, and worked as a painter and an art dealer. According to scholars’ textual research, he did about forty-five to sixty paintings throughout his life, and only 36 still exists. The Metropolitan holds a total of five paintings, all of which appeared in this exhibition.

Vermeer’s paintings are said to be the exquisite taste of the “Bourgeois.” There is a sense of transcendent tranquility in his paintings, whether it be a lady getting dressed, a young woman reading a letter, or a maid at work, they all have a sense of privacy, as if they are completely undisturbed by the outside world. It is hard to imagine that he can create such quiet paintings with his ten children around.

This tranquility is not only the expansion from the internal to the external environment. Vermeer’s landscape paintings, such as the View of Delft, make it for us to believe that this was the golden age of a prosperous society. Scholars found that this large-scale landscape painting may not be a contracted work. He didn’t have many buyers, even as a broker himself, who knew the type of paintings that would sell. It seemed that he has drawn a clear boundary on this matter. There was no hesitation in his use of expensive coloring materials: lapis lazuli and yellow ochre were repeatedly used in his paintings.

In Young Woman with a Water Jug, (ca. 1660-1662), a woman stands by an open window, holding a gold jug and placing it on the gilded basin; she was covered with white linen from head to body. It reflects the artist’s interest in family themes, and observation of women’s private lives. In The Milkmaid (ca. 1657-1658), the plump and strong maid shows the abundance of the society, the richness in material supplies; the maid’s hands are strong, and her movements are skillful and steady.

In this period, sacred religious paintings were no longer demanded in every household, and the number of religious paintings were scarce and with a different categorization. When the Dutch Republic prohibited public Mass celebrations, Vermeer depicted the victory of the Catholic Church in the Allegory of the Catholic Faith (ca, 1670-1672) using a complicated parable. Religion has always been the main theme throughout European history. This painting, however, was the only work in the genre of religious history created during that period of time. The content of his paintings reflects his dedication to the study of religion, astronomy, navigation, and people; they were a microcosm of the Dutch social phenomenon at the time.

The difference between the lighting in his paintings and that of Rembrandt’s is that one was intuitive, while the other was created under an objective environment. With the decline of the Dutch Republic, Vermeer was troubled with financial problems. According to later textual research, he died of illness caused by financial pressure. Vermeer’s works was discovered two centuries after his death, much like Rembrandt, whose paintings was rediscovered in the 18th century. But Rembrandt lived much longer than Vermeer and created more paintings; he was also an art dealer and had many collectors at the time. In comparison, Vermeer was unknown to the public during his lifetime, and he never travelled beyond Delft.

Either the renowned Rembrandt or the nameless Vermeer, they struggled in art creation, often relying on family business or the appreciation of a small number of collectors; yet their artistic life ended with the decline of the Dutch Republic. It was not until a hundred years later that Rembrandt was seen again; while Vermeer’s exquisite paintings have become the national treasure of the Netherlands. As for Lairesse’s delicate, enlightening, and aristocratic art was completely obscured by the bourgeois painters.

We are grateful to Rembrandt for leaving us with a portrait of Lairesse, even if it is dim and dark, and covered in muck.

A Safe Haven for Scholars and Advisers

The Netherlands is relatively tolerant compared to other European countries. In particular, the strict censorship in other countries provided conditions for the Netherlands to become the largest country in the book trade. Additionally, the Dutch have a high literacy rate, and entrepreneurs benefited from it. As a result, the Netherlands in the 17th century became an important center for the production of banned books, news, Bibles, and political pamphlets, until the end of the 17th century and the beginning of the 18th century when the Dutch Republic collapsed and Great Britain rose.

Lairesse’s work has been exhibited in many museums around the world in recent years, including the Rijksmuseum in Amsterdam and the Amsterdam Museum, the Louvre in Paris, the National Gallery in Washington, D.C., the National Portrait Gallery and Tate Gallery in London, and the Cleveland Museum of Art. The National Museum of Twente in Enschede also held an exhibition and conference on Lairesse’s works from 2016 to 2017. And what does the Apollo and Aurora exhibiting in the Metropolitan Museum at this moment symbolize? The rebirth of the elite aristocratic art? The weariness of the all-encompassing modern art? Is it possible for art to return to the path of idealism, to the admiration of the gods, and to classicism? If we believe that art is a bridge given to men to communicate with God, then art is not just a means to vent human emotions. Moderation and cultivation will always be necessary.◇