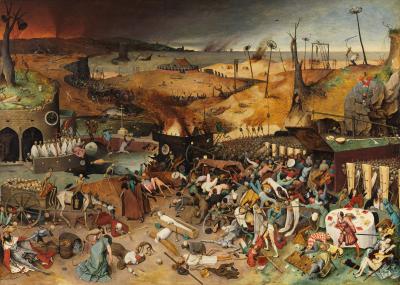 Plagues Delineated in Paintings — Stories of Crime and Punishment (V)

The Triumph of Death, a fresco of the Monumental Camposanto of Pisa (Camposanto Monumentale), by Francesco Traini.

Out of a heap of corpses appeared naked children who represented the deceased people’s souls. Some of them were taken away by angels, some by devils.

some souls were being disputed over by both angels and devils.

Legions of skeletons advance on the living, mercilessly killing them with various kinds of executions and taking over the living world by degrees.

A pair of skeletons ring the bells that signify the death knell of the world.

In the center, a mysterious man clad in black and on a black chariot, leads the skeleton army. He is seen instructing another skeleton on horseback to execute the frightened crowd, as they are herded to a coffin-shaped trap, with a scythe.

Detail from “The Triumph of Death”, left side.

Detail from “The Triumph of Death”.

Detail from “The Triumph of Death”, right side, people dining and partying are intruded on by the skeleton army.

Detail from “The Triumph of Death”.

“Triumph of Death (Trionfo della morte)”, a Gothic fresco in the Regional Gallery of Palazzo Abatellis in Palermo, southern Italy (1446). The painter of the work is unknown.

People witness the most horrific scenes of deaths in plagues — many piled-up decomposing bodies, be they of nobles or the humblest of peoples, needed to be buried. So direful is the sight that it is so much like “hell on earth” and the memory of these scenes are forever imprinted in the minds of those who survive the pandemic. From the Middle Ages to the early Renaissance, due to the plague pandemics like that of the Black Death, people sadly realized that life was impermanent and death — immutable. Such sentiments of pessimism and helplessness can be reflected in art and paintings. A popular painting in Northern Europe, The Dance of Death1, for example, portrays skeletons as the embodiment of Death, escorting and leading people to the end of their lives. This painting reminds all of “the inevitability of Death.” Just as in plague-stricken Italy, the painting, The Triumph of Death, underlines that regardless of intellect or social standing, no one can escape death from the plague. Does this mean that life is meaningless and that doing good deeds is just the same as doing bad deeds, that everyone is bound to die anyway? Many question their faith out of despair, and become self-indulgent, wasting their lives at the end of the day. Others, however, come to the conclusion that precisely because nothing lasts forever, only then under God’s guidance can eternal life be obtained. In short, both types of people will die eventually— their souls, however, will go divergent paths: either they receive redemption OR retribution, depend on the choices they made in life.

A fresco of the Monumental Cemetery (Camposanto Monumentale) of Pisa in Italy, named The Triumph of Death by Francesco Traini, reflected the devastation of the Black Death of 1340 in Europe. Out of a heap of corpses appeared naked children who represented the deceased people’s souls. Some of them were taken away by angels, some by devils, and some others were being disputed over by both angels and devils. The fresco did present such thought-provoking scenes.

A rather famous artwork of the same title, The Triumph of Death, was created by a 16th-century Dutch painter, Pieter Bruegel the Elder. He incorporated Northern European tradition presented in the The Dance of Death with the Italian concept of The Triumph of Death delineating the miserable state of a populous number of fatalities and people’s helplessness caused by wars and plagues in a wry and morally allegorical manner. Serious though the theme was, the painter’s humorous style and harmonious color employment diluted much of the horrific scenery.

Influenced by Hieronymus Bosch (1450-1516), Bruegel favored panoramic paintings. He often depicted aspects of everyday life with a transcendent and God-like perspective and overview. The Triumph of Death portrays tragic scenes as if it were the Apocalypse extending from the distant horizon: ominous red sky and dark clouds, shipwrecks at sea, smoke on scorched and barren land, torture devices such as gallows and spoke wheels, dead human bodies and livestock carcasses. In the upper left corner, a pair of skeletons ring the bells that signify the death knell of the world.

Legions of skeletons advance on the living, mercilessly killing them with various kinds of executions and taking over the living world by degrees. In the center, a mysterious man clad in black and on a black chariot, leads the skeleton army. He is seen instructing another skeleton on horseback to execute the frightened crowd, as they are herded to a coffin-shaped trap, with a scythe. People jostle and tumble into each other in chaotic frenzy and unsuccessfully ward off the blows. Few brave ones fight back with weapons but also to no avail as they are outnumbered by the “skeletons.” Skeletons on the left side of the painting pull a wagon full of “trophies— skulls”, following behind as victors, and run over people apathetically. Many details of the painting depict Death’s pursuits, killings and executions. The outcome of the battle between the living and the dead is evidently already predetermined.

Intriguingly, people of different social backgrounds— from peasants to soldiers to nobles, kings, cardinals— are seen in the foreground, being taken by Death indiscriminately. Skeletons who accompany them, make fun of their follies, including being greedy for wealth, committing murder out of avarice, excesses in eating and drinking, gambling, and possessing strong carnal desires. A dying king, at the bottom left-hand corner of the painting, helplessly witnesses his wealth being looted by an armored skeleton— an act which he had done to others before his death. Another skeleton behind him shows him a soon-to-be emptied hourglass warning that his life is soon running out of time. Religions hold that repentance at one’s dying bed is crucial, however, the king’s last thoughts were still on his vain wealth. Nearby, another skeleton mockingly wears a cardinal’s red hat and “kindly” assists the cardinal towards the end of his life. In the center foreground, a pilgrim has his throat cut by a skeleton for his money purse. To the right, people dining and partying are intruded on by the skeleton army. Chairs are knocked off, wine glasses overturned and broken, playing cards and backgammon board scattered all over the melee. A man with a drawn sword is seen while a jester takes refuge under a table. A woman entangles herself with a skeleton of amorousness. Another skeleton serves a “dish of human bones” to the table while a horrified woman stands aside in shock. A skeleton with a human mask on as disguise empties two flasks of wine. A pair of lovers sing together and play the mandolin, oblivious to another skeleton mimicking them in a parody of secular happiness. All these details reflect the fact that various desires and human pursuits cannot be brought along at death and may even be distractions to have people forget the true meaning of life and lead them into destruction instead.

Bruegel had always used allegorical imageries to enrich the themes of his paintings. A woman lying before a wagon, for instance, about to cut a slender thread with a pair of scissors symbolizes Atropos (one of the three goddesses of Fate and Destiny) who ends mortals’ lives by cutting their life “threads”. The woman nevertheless is portrayed as “cutting” her own destiny. Nearby is another woman lying down with an infant and holds a spindle, a symbol of the other goddesses2 who spins man’s Fate and measures the length of a human’s life— a metaphor of the fragility of human life. Apparently the woman cannot anymore spin thread for the newborn as well as her own life. Every image in the painting has its own respective story.

The tragic scenes of this painting are hard not to be reminded of the Apocalypse foretold in Revelation3 (Apocalypse or the Book of Revelation) where the Four Horsemen symbolized Plague, War, Famine, and Death will cause human tribulations upon the end of the world; the fourth horseman Death waved a scythe4: “I looked, and there before me was a (pale) green horse. Its rider was named Death, and Hades was following close behind him. They were given power over a fourth of the earth to kill by sword, famine and plague, and by the wild beasts of the earth5." The death theme used to be depicted in a fresco in Palazzo Abatellis in Palermo6, serving as a good reference for Bruegel.

Whether it be war, famine, or plague, for humans, the ultimate consequence is death. The artists shared the same idea as the prophecy of the Apocalypse, warning people to rectify and align their conduct in accordance with God’s instructions before the Apocalypse happens and save their lives from destruction and onto a beautiful destination.

Because of its profound moral impact, the epical painting was later praised and collected by Philip II (a member of the Habsburg dynasty). Nowadays— particularly at these most crucial times, the painting would just as rouse people’s reflections. Take a broad view of the world, with the present raging pestilences, incessant floods and locust invasions, global economic recessions, a string of violent incidents, food and moral crises, and the pending occurrence of various conflicts, experts alert the public to the looming “Apocalypse described in Revelation.”

So as the previous articles have constantly mentioned, natural and man-made disasters are mostly related to the sins of man.  Both the gods of Plague and Death punish men and follow the edict of God’s Law. Whether one accepts these viewpoints or not, human beings are after all miniscule in comparison to the breadth of the universe. If one seriously takes these plagues and calamities as a warning because of one’s iniquities and sins, honestly scrutinizes his inner self, repents and reforms himself amid all these cataclysms and tribulations, then one may prevent disasters from happening and even turn one’s life around for the better!

1. The Dance of Death (Danse Macabre in French) was an artistic genre in the late Middle Ages and an expression of a Latin phrase Memento mori, meaning “remember you must die,” seen in all kinds of paintings. A common theme is anthropomorphic death, such as skeletons, which implies the fragility of life and the inevitability of death for all beings, no matter one’s station in life.

2. Atropos (Ἄτροπος, literally meaning “unalterable” or “inflexible”) was one of the three goddesses of Fate in Greek mythology. Her Roman equivalent was Morta, death. It was Atropos who ended the life of mortals by cutting their threads. Clotho spun the thread, and Lachesis measured the length. Atropos, the shortest of the three, who was often depicted as an old woman holding a pair of scissors, only concerned with death and decided what may happen to individuals’ end of life.

3. “Revelation” in Greek, Αποκάλυψις (apokalypsis), means unveiling or revelation. The author is John of Patmos who is conventionally believed to be John the Apostle in Christianity. The text of Revelation mainly describes the warnings of events to come, including the prophecy of the Apocalypse: one disaster after another, scenes of the Apocalypse, and the Last Judgment. The reappearance of god is the focal point.

4. The Four Horsemen of the Apocalypse (usually referred to as the Four Horsemen) appeared in Revelation 6 and were, yet debatably, interpreted as Plague, War, Famine, and Death.

5. Revelation 6: 1–8
6. Triumph of Death (Trionfo della morte) is a Gothic fresco in the Regional Gallery of Palazzo Abatellis in Palermo, southern Italy (1446). The painter of the work is unknown.