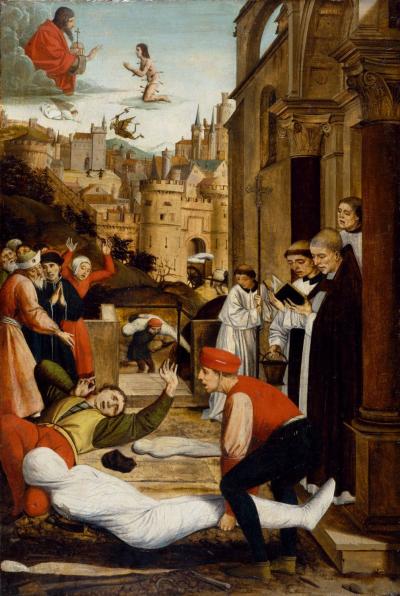 Plagues Delineated in Paintings — Stories of Crime and Punishment (IV)

A mortuary attendant, himself struck by the plague, groaning on the ground while people around look very helpless.

St. Sebastian interceding with the Gods on behalf of the people.

A great number of plagues broke out during the Middle Ages of Europe after the fall of the Western Roman Empire; meanwhile, it was already the heyday of Christianity. So, how did the Christians face the plagues?

The 15th-century painting St. Sebastian Interceding for the Plague-Stricken, by Josse Lieferinxe, shows a plague raging in Pavia1 (the then capital of the Kingdom of the Lombards) in the 7th century. The foreground of the painting depicts the horror of the plague: a mortuary attendant, himself struck by the plague, groaning on the ground while people around look very helpless. Even the clergy themselves are seen feebly chanting prayers and could not fend for themselves. The painting shows everyone afflicted with the disease. No one is spared — including the faithful. Legendary “good and bad angels” appear in the sky attacking targeted households (it reminds that the outbreak of plagues is compliant with God’s will and the people’s days are numbered.) In the upper section of the painting shows a most sacred scene of St. Sebastian2 interceding with the Gods on behalf of the people.

The Old Testament chronicles numerous instances of God’s warning and punishing men, be they heathen or Christians, with plagues. How do men prevent plagues and placate God’s anger? Christianity emphasizes the need for the act of confession. Christians are required to frequently scrutinize their own conducts, whether they meet Gods’ teachings and standards. They can then be forgiven by repenting sincerely especially when faced with disasters. Scenes of the clergy invoking prayers and the saint interceding in the heavens are depicted in the painting. But God held out his hand and seemed to be stopping and rejecting the saint’s intercession. Why did God show no mercy? Could it be that the people were not sincerely repentant to be forgiven? Or that the people had to undergo tribulations to redeem karmic debts? It may be explained by the story of Shakyamuni’s disciple, Muqianlian, who attempted to save Shakyamuni’s clansmen by using his supernatural power but by doing this failed to change their preordained death-retributions. Gods and Buddhas are of supreme benevolence and impartiality. They uphold the Universe’s Laws by rewarding the virtuous and punishing the wicked. Their compassion is to have sentient beings always be reminded of their lessons.

1. The painter had never been to Lombardy hence he took Avignon as a background reference instead of Pavia.

2. Some were enlightened by the History of the Lombards written by Paul the Deacon: an altar was built in honor of St. Sebastian who would stop the plague, of which it was indeed fulfilled. St. Sebastian was therefore regarded as the protector against the plague. He also symbolized the hope of survival for he was sentenced to death by arrows but recovered from it. Christians pleaded for God’s mercy through St. Sebastian in that his arrow wounds were like sores caused by