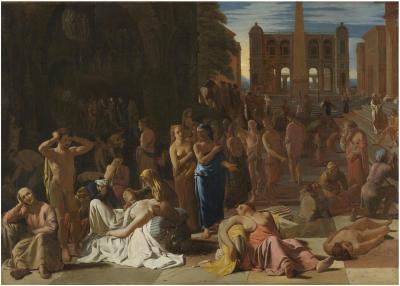 Plagues Delineated in Paintings — Stories of Crime and Punishment (III)

Fresco painted by Antonio del Pollaiuolo，Church of Saint Peter in Chains (Church of San Pietro in Vincoli). In the center of the mural, the "good angel" instructs the "bad angel" to perform tasks.

A struggling man at the bottom right of the painting looked up in anguish at Esculape from whom he sought help but received no answers.

Perhaps the statue of Marcus Aurelius is suggesting that the plague is related to him?

Sweerts was profoundly influenced by Poussin and painted Plague in an Ancient City as tribute to Poussin’s The Plague of Ashdod. As such, numerous elements in his painting were similar to that of Poussin’s. Viewers can compare the two paintings for themselves. Sweerts had not shown any specific historical background nor preached any moral lessons in the painting. It is presumed that the painting depicted the Plague of Athens amidst the Peloponnesian War around 430 BC. This plague devastated Athens, killing half of Athens' population. But why would the plague strike Athens when it had a highly developed civilization as compared with Sparta, which fought against Athens, that came out unscathed? It was during the course of developing its civilization that Athenians led decadent and debauched lifestyles. Promiscuity and depravity can be seen in their pottery paintings where scenes of adultery, homosexuality and multi-person promiscuity were depicted. It was reminiscent of Sodom and Gomorrah, two cities mentioned in the Old Testament destroyed by Gods for its promiscuous people. Many desperate people felt they were abandoned by the gods and because they lacked self-reflection, still continued and sank deeper into depravity, as well as ceased to fear law and religion during the plague. Such deplorable mindsets led to the fall of Athens; the Spartans, unlike the Athenians, were rigorously trained in combat and with this life of self-discipline, may be the reason why the Spartans were spared of the plague.

Some people think that Sweerts’ painting portrayed the plagues that happened during the Roman Empire when its army was the most invincible force around, its territorial holdings spanned the continents of Europe, Asia and Africa. Having laid a significant foundation for Western civilization, the Roman Empire had been an exemplar for future generations in many aspects: politics, law, philosophy, culture and arts. Plagues, however, with its four documented pandemics and intermittent small-scale epidemics, raged the Empire periodically. Among the Roman Emperors, some managed the Empire well, some expanded its territories while some were just as depraved. As the Empire grew stronger and achieved hegemony, its people led profligate, debauched and bloodthirsty lives with its worst crime ever: the persecution of Christians. The 300-year persecution was carried out by numbers of emperors since Nero (Nero Claudius Caesar Augustus Germanicus) who had Rome burned to the ground and blamed the Christians for the conflagration. Not only did he defame, spread ugly rumors and incite hatred against the innocent Christians, but also had them burned to death as well as devoured by beasts just to amuse himself and Roman civilians. This long-standing persecution did not succeed in wiping out Christianity, however. On the contrary, the Christians’ compassion touched the Romans’ hearts more and more and this power of faith eventually converted the Roman Emperor to accept Christianity, making it eventually the official religion of the Roman Empire.

Delaunay, an artist of the School of Fine Arts, won the Prix de Rome and eventually resided in Rome for classical art study. When visiting the Church of Saint Peter in Chains (Church of San Pietro in Vincoli), Delaunay was inspired by a 15th-century fresco painted by Antonio del Pollaiuolo.

Delaunay painted scenes of the plague-stricken ancient Rome in the academic style: deserted streets, piled bodies, dying men, etc., with the most dramatic of which, two figures, a winged angel commanding another black-robed man (the Angel of Death or the god of the plague?) to strike a house with his spear. This painting was based on the fresco painted in 1476.

Both the fresco and Delaunay’s painting delineate a plague-stricken city with notable elements like steps, a statue, piled bodies and most importantly, an angel and a “hatchet man.” The image of the angel and the hatchet man stems from a mediaeval compilation, Golden Legend (Legenda Aurea or Legenda sanctorum) （1） about the legendary lives of saints. It has a passage that goes, “There appeared a good angel, who commanded a bad angel, armed with a pike, to strike the houses and each house had as many dead as the number of blows on the door.” The Christians believe that the then plague was a warning and divine retribution for the Romans’ persecution of Christianity. The good angel was God’s messenger while the “bad angel” was an enforcer and implementer, much like the god of plague in China and the Angel of Death claiming lives in the West.

Some may wonder: Why would the common people bear the consequences of persecution that was enacted by the Roman emperors? Give some thought to it: they also witnessed the innocent Christians being devoured to death by beasts in the colosseum for fun. Would they be blameless in God's eyes?

A struggling man at the bottom right of the painting looked up in anguish at Esculape (or Aesculapius, the Greco-Roman god of medicine) from whom he sought help but received no answers. It appears to imply that Gods of the past religions could no longer save them. Seen from another perspective, it is of no use praying to Gods if human beings are punished for wrongdoing.

A statue in the background might be that of the emperor Marcus Aurelius (Marcus Aurelius Antoninus), who also made the same mistake of persecuting the Christians despite being one of the Five Good Roman Emperors. His troops brought a plague to the Empire from campaigns. Constantine the Great, who liberated Christianity from persecution and was eventually converted to Christianity, has his name however inscribed on the plinth in clear lettering. Was there a hidden meaning placed by the artist? The statue’s hand pointed towards the two angels, seemingly directing viewers to contemplate on why the plague took place and the gist of the gods’ message.

1. The Golden Legend (Latin: Legenda aurea, around 1292), initially entitled Legenda sanctorum (Readings of the Saints), is a collection of hagiographies by the VIII Italian archbishop of Genoa, Jacobus de Varagine (1230-1298). Each chapter depicts the lives of the saints, including Jesus Christ, the Virgin Mary, Saint Michael the Archangel, etc., as well as over a hundred more of them.