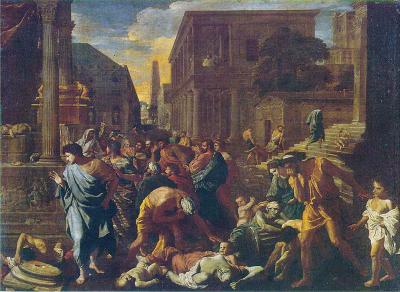 Plagues Delineated in Paintings — Stories of Crime and Punishment (II)

Among Western paintings depicting plagues, the most notable work is Poussin’s The Plague of Ashdod, which has been a reference point for plague-themed paintings. The painting depicts a story from 1 Samuel in the Old Testament:

The Israeli priest Eli, a guardian of the Ark of the Covenant, had two sons who blasphemed God, exploited civilians, and even committed adultery. The God of Israel said,” Judgment is coming upon Eli’s entire family for Eli hasn’t disciplined his sons. They will never be forgiven by sacrifices or offerings.” The Philistines later defeated the Israelites who suffered heavy casualties. To boost their morale, the Israelites brought the Ark with them to battle under the premise that God would shield them from the Philistines’ attack. Yet, despite their expectation, the Philistines still crushed them. Not only were the two sons of Eli killed, but the Ark was captured as well. Upon hearing this bad news, Eli passed away and died.

The Ark was brought to Ashdod as a trophy and set up as an offering to the Philistine’s deity in the temple of Dagon. However, the next day, the Philistines found the statue of Dagon toppled before the Ark and set the statue upright. The Philistines returned the following day only to find the Dagon statue fallen again, this time with its head and hands cut off. At the time, plagues ravaged Ashdod and the Philistines were afflicted with tumors. The theft of the Ark was believed to have unleashed Yahweh’s wrath and caused the plagues. The Philistines then followed the instructions of the prophet and returned the Ark back with gifts made out of gold as apology to the Israelites.

Poussin painted The Plague of Ashdod in 1631 amid a plague raging in Italy (1629-1631); as such, this direct experience gave Poussin a good reference. The historical background of his work was therefore more identical to the setting of a majestic Roman city than a Philistine tribe of 3,000 years ago.

An agitated crowd portrayed in the painting shows the dreadful state caused by the plague as depicted in the foreground with a most eye-catching image of a mother seen lying on the ground with two infants in need to be nursed. Judging from her green and ashen-colored skin, she had already long been dead; a man is seen, with a hand covering his mouth and nose, reaching out to save one of the surviving infants; at the right side of the painting is a dying elderly woman seen resting on a fallen column, showing no reaction to everything around her even to a child asking her for help. Three classes of vulnerable victims: women, the elderly and toddlers only accentuates the ruthlessness of the plague. People around are seen helpless and frightened to be infected. That they hold and cover their noses indicates the strong stench of death all over the place.

The middle ground of the painting shows the scourge of the plague — the Ark. The Ark and its Guardian Cherubim are seen standing over the broken Dagon statue in the temple. Before the throng of people, a high priest in white robe points to the Ark as the scourge of the plague. An engraved relief at the bottom of the temple illustrates the wars between the Philistines and Israelites explaining the background of the calamity. Two men carrying a body on the temple steps at the right of the painting shows the heavy casualties wrought by the plague.

The overall tone of the painting, despite the clear blue sky above, appears slightly somber and a gloomy ambience is felt which the plague had palpably spread out on air and light. Poussin profoundly depicted human nature during the plague: dodgy, petrified, caring, indifferent and accusing. All elements in the painting seem disorganized, yet in fact, the composition was well thought of and methodically organized.

What does this story of the plague remind us of?

When mankind deviates from Gods’ teachings, regardless whether the worship of the gods is constantly made, disasters are most likely to be induced. The Israelites took the Ark to battle thinking that it will protect and shield them from defeat. So blasphemous was this action that the Israelites weren’t safeguarded by their God at all. The same fateful consequence happened to the Philistines when they defamed and insulted their opponent’s righteous religion, so their deity didn’t bless them either.