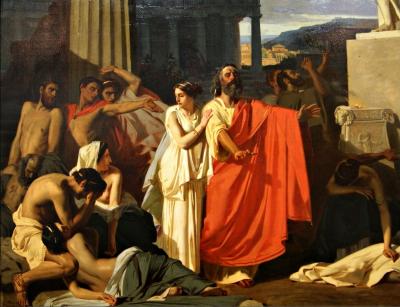 Plagues Delineated in Paintings — Stories of Crime and Punishment (I)

Humankind, since ancient times, have been in constant awe of the unfathomable mighty power of Nature. Man had been invoking the intercession of gods especially when faced with insurmountable catastrophes believed to be divine retribution for sins committed. Notable to say, it was of crucial importance that a leader’s moral character and conduct that comply with the heavenly principles be present. Hence the saying “Often does an inhumane sovereign incur plagues.” Added to this, when degenerate and corrupt behaviors are more the norm in a society, then correspondingly, man-made and man-induced calamities, including plagues, are bound to happen. Unfortunately, contemporary people do not fully believe in these principles while it was a general belief of both Eastern and Western ancient cultures.

The opening scene of the renowned Greek play Oedipus Rex (aka Oedipus Tyrannus or Oedipus the King) was a plague ravaging Thebes. Oedipus, the King of Thebes, was at his wit’s end how to deal with the plague and decided to send one of his men to the Temple of Apollo in Delphi to ask for the oracle’s advice. After some twists and turns of investigations, the unbearable truth came to light: Oedipus, himself, was the cause of the plague for his immoral acts of killing his father and marrying his own mother! Out of remorse, Oedipus blinded and exiled himself as atonement for his evil deeds. The plague, however, is not the focal point of the play as the plot raises later generations’ discussions from different angles. What the play proves is the Greeks’ belief that the gods control the destinies of mankind and that committing sins — whether wittingly or not — is bound to inflict divine retribution.

The play was depicted in Oedipus and Antigone being exiled from Thebes (Œdipe et Antigone s'exilant de Thèbes) by the 19th-century Academic artist Eugene-Ernest Hillemacher (1818-1887) in 1831.

The backdrop of the painting is set in Thebes where a plague is seen raging with people laying on the ground in the throes of death. Oedipus and his daughter are seen vividly at the center with brightly colored clothes. The artist portrays Oedipus in a tragic stance: a noble and strapping man with blood on his face suggesting that not long ago he had suffered from gouging his own eyes and losing his throne; his outstretched arms seen to grope for the invisible and uncertain future. Having been made aware of the truth that Oedipus had committed incest and patricide and that he was the cause and scourge of the plague, the populace turned viciously against him. They gave no sympathy for the king’s self-harm and exile and dealt with him in disgust, disdain, and censure. In contrast, the artist highlights his daughter, Antigone’s virtues of loyalty, compassion and bravery through her own expression and resolute stance of not abandoning her father to fend for himself in exile, which had also cost her royal title. She suffered the public’s condemnation in silence and protected her father from being infected with the plague as well as the people’s assaults towards him. The loving bond and interdependence between father and daughter can be seen to stand out in glory in contrast to the misery, tribulation, and hostilities of the people around them.

Oedipus’ misfortune may indeed be pitiful and tragic but the inevitable truth is that even if he was once considered a noble king and courageous hero1, his reprehensible conduct went against humanity and later condemned him to be despised by the people and received divine retribution. （1）Charles Jalabert’s 1843 painting Oedipus and Antigone or The Plague of Thebes portrays the same theme and despite the similar representation of the tragedy, it is a slightly inferior work to that of Hillemacher. Not only was the depiction of Oedipus mediocre, his portrayal of Antigone was that of a doubtful and tense nature. Readers can compare the two paintings for themselves.

1. Oedipus rescued the Thebans from the Sphinx, a woman-headed lion, and thus became a hero. As a reward, he was given the throne of Thebes and the hand of the widowed queen (who later turned out to be his own mother).